Japanese has many pronouns, in the first and first and second person.

This is because there are several social classes, and many situational uses I in Japanese.

When you study Japanese, you may find the word 私（わたし) "I" in English as the most common translation of I, but we use more than 私（わたし) .
Japanese pronoun is unique because you can tell a persons personality by the pronoun that they choose to use.

Using characters from One Piece let's figure out who uses which pronoun. People may use many of these themselves, you too can choose your pronoun of preference depending on your personality.

*Japanese 'R' sounds more like 'L', but the Japanese government uses R for らりるれろsounds when they show Japanese words in foreign languages, so I too use R.

私(watashi) is used for usual women, girls, and men for business situation, and men who are or appear to be royalty. I use 私 in business, shool, and family situation. My dad uses 私 in business situation, but not in family.
Who uses 俺（おれ, ore）?
Luffy, Zoro, Sanji, Usopp, Chopper, Franky, Shanks...a lot!
Ore is used by many guys who look/try to be/want to be strong, bad, fashionable and cool.
This is used only among friends, family, and playful group.
A lot of Japanese men use it except in the business scene.

Who uses 僕(ぼく, boku)?
Cobby, many kid characters.
Boku is often recommended to use for kids by their parents specially in school.
Some Japanese men still use, but sounds more weak, gentle, and serious like Cobby.
When elementary school kids write an essay, they use boku mostly as their pronoun.

Garp (Luffy's grandpa), and many old characters.
I've heard people who use washi as their pronoun only few times in my life (in real life), but a lot of anime characters specially old people use washi. According to Wikipedia, washi is still used by old people in Hiroshima.  Mayby it is part of the Hiroshima dialect.

*The following, I have never heard in real life.

Boa Hancock
Sounds very old style. It was used  300-500 years ago in real life, but not any more.
Hancock is living in an isolated island, so the author may want it to appear that the island not changed for a long time, or isolated from outside influences.

By the way, Son-Goku from Dragon Ball uses 'Ora', because of this Ora has become a popular pronoun in Japan among boys.  This made some parents worried because Ora is used only in anime, and it sounds funny, naughty, and tomboyish. Growing up my brother used it for a year, before my mum put a stop to that. Hahaha...


Have you decided which pronoun you will use?
Posted by Hitomijo at 6:39 PM No comments: 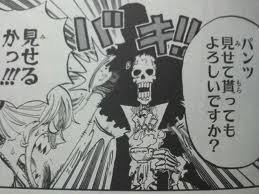 This scene from One Piece is a very popular example of Brook's greeting when he meets cute girls.

Brook: パンツ見（み）せて貰（もら）ってもよろしいですか？
May I see your panties?

バキ！！
Is the sound of Nami kicking Brook's head.

Today's grammar check point is ........（.して）もよろしいですか forms. *してis transformation of する
This form is pretty polite to ask somebody that a questioner get permission to do something.

But, in this case, Brook asks Nami パンツを見せて貰う (to show her panties).
If Nami says yes this means that Nami would lift up her skirt to show Brook, not Brook lifting Nami's skirt to look himself.
This is because 貰う indicates the other is person is going to do.

If you want to ask to see panties by checking with your action (ie. lifting the skirt), you can say...
パンツ見てもよろしいですか。
This sounds more direct, and if the answer is yes, you will flip the skirt, and see the panties instead of she shows her panties.

When you say いいですか instead of よろしいですか, it sounds less polite, but still good way to ask.

Quiz:
Change よろしいですかorいいですか form to get permission from somebody.
Right answers will be on next week!

The answers are here.
These question are from website below of this post.
http://www.japanese-nihongo.com/grammar/index.html
Posted by Hitomijo at 3:35 PM No comments:

Email ThisBlogThis!Share to TwitterShare to FacebookShare to Pinterest
Labels: Can I...?, May I...?

Today, I am going to write about Japanese books.

As you know, this post is for beginners, but I'm also going to write for basic, intermediate, and advanced levels eventually.

Some people already know about how to read 漫画 (マンガ, まんが, manga). Manga opens from left edge to right unlike usual English books.  This is because Japanese manga are written vertically from right to left. I know of a few mangas that are written horizontal like English, but most publisher companies prefer vertical. Japanese newspaper also open from the left edge to right side.

When mangas came to Europe and North America, publisher companies tried to publish them like books that open from the right side.  An example would be the first Dragon Ball were published opening from right in France.
The problem was all Japanese characters part of the manga, not the dialogue, appeared overturned because the publisher used a mirror technique. Mirror technique publishing causes some problems for the story.  For example, if a manga character is left handed in Japanese, the story the character will be  right handed when published using mirror image.  It might be a big problem later, who knows?  Therefore, it is very important to tell a story same as original. Translaters are also taking care to translate to other languages with the exact same meaning. Therefor, currently manga published in English are written the direction as in Japanese manga.

You read manga from left to right + top to bottom.
I give you an example of how to read manga. 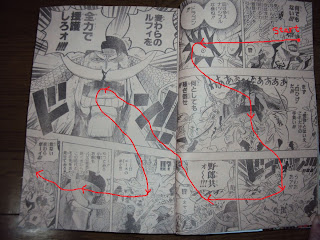 Posted by Hitomijo at 7:22 PM No comments:

This is for people who don't have any knowledge of the Japanese language.

When you open manga (written in Japanese), you can see 3 types of characters: ひらがな(Hiragana), カタカナ(Katakana), and 漢字(Kanji).

This is very unique that a language uses 3 character forms, and we sometimes use the English alphabet too.
Why?
The Japanese language doesn't have spaces between words like English.
So, if all words are written only ひらがな(Hiragana), it is too complicated to figure out
where one word ends and another word begins.

I am going to write how all 3 characters used for, but there are a lot of exceptions.
So, please remember them as basic knowledge.

ひらがな(Hiragana) is used for Japanese nouns (my first name is written in Hiragana), transition, verbs (a lot of times combination of ひらがなHiragana and 漢字Kanji), adjectives, adverbs, onomatopoeia, and sound effects. Also, ひらがな(Hiragana) is often written  on the right side of  漢字(Kanji) for little kids. Until Japanese kids graduate grade 6, they don't have enough knowledge of 漢字(Kanji), and ひらがな(Hiragana) is written to help them.  this is also good for foreign people trying to learn Japanese.  We call the ひらがな(Hiragana) beside 漢字(Kanji) ふりがな（Furigana). By the way, there are no ふりがな(Furigana) for newspaper.

カタカナ(Katakana) is used for foreign words: コンピューター(computer), チーズ(cheese), ピアノ(piano), and so on...and, I just noticed カタカナ(Katakana) is also used for sound effects too. カタカナ(katakana) is used often times when words want to be emphasized.
English screams are written like "Aaaaaaaaaaaaaaaaaaaahhhhhhhhhhhh!!"
In Japanese, you can see 「あああぁぁぁぁぁ！！」、「あああーーーーー！！」 a lot.
あis the first letter of Japanese alphabet, and it is pronounced "a" like when you pronounce "ah".
あis not like English alphabet "a" or "a" of apple.
If you want to know more Japanese pronunciation, please check You tube.
There are many Japanese pronunciation videos.


漢字(Kanji) is originally from China, and some people call them Chinese Character.
However, 漢字(Kanji) in Japan and mainland China are mostly different because
the Chinese government changed complicated characters to simplified one.

Therefore, many Chinese kanji are not used in Japan in these days.
漢字(Kanji) is used for nouns, verbs (combination of Kanji & Hiragana), adjectives, adverbs, and so on.

Posted by Hitomijo at 4:13 PM No comments: 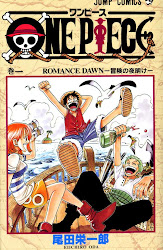 Hitomijo
I am a Japanese woman who came to Canada in 2007, and I found a lot of non-Japanese people are interested in manga. So, I'd like to tell you how to read it in Japanese through my favourite manga or anime. My English is not perfect, so if you find any mistake, please tell me.